SINCE 2013, MONDOUX’S CONCEPT OF THE BISTRO-CAFE HAS BUILT A STABLE PLACE IN THE WORLD OF GASTRONOMY. GROWTH WAS INEVITABLE, AND CURRENTLY, THERE ARE NINE BISTROS LOCATED IN PRAGUE, BRATISLAVA AND KOŠICE. ONE OF THEM, HOWEVER, IS COMPLETELY DIFFERENT FROM THE OTHERS. 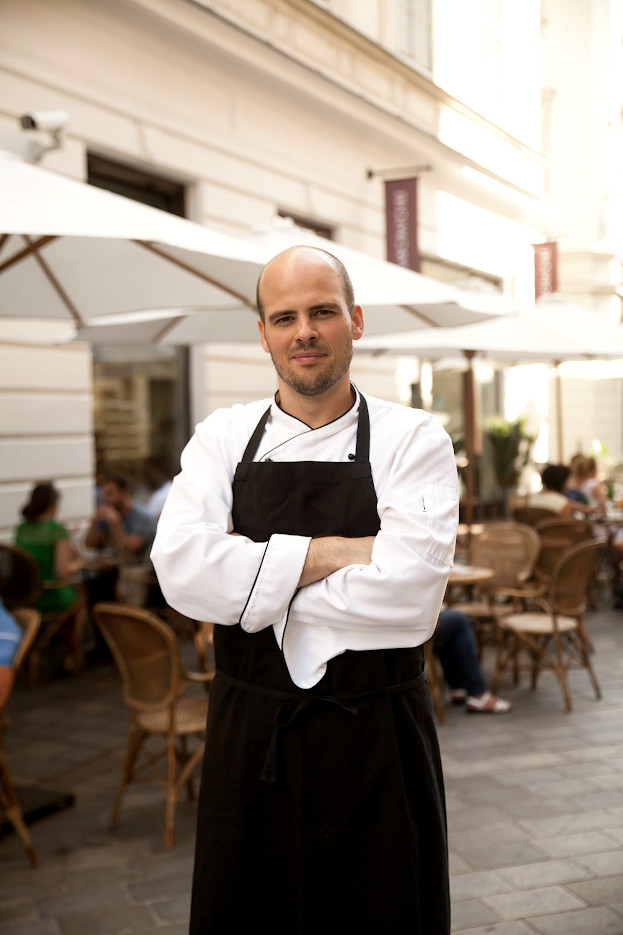 This is Mondoux FRANCHISÉ No. 1. As the name suggests, it is a franchise operation. However, it is significantly different from the usual franchise. The most important fact about Mondoux FRANCHISÉ No. 1 and other similar operations is that the owner does not have to put in any initial capital to buy the operation or licence. All they need is an entrepreneurial spirit, the ability to lead an independent operation and a sense of gastronomy. The owner has to demonstrate all of this for at least one year as part of the Mondoux team.

The proof that this principle really works is in Executive Chef Martin Adámi, who became the first owner of Mondoux FRANCHISÉ No. 1 under the auspices of Mondoux. “We focus on cutting-edge gastronomy and take advantage of little-used processes in food preparation, such as fermentation,” said satisfied bistro owner Martin Adámi.

His story of how a chef became the boss is an inspiration for many others. We offer opportunities to any talented person with a head for business but who doesn’t know how to start or hasn’t been able to. The opportunity has just arrived.

MARTIN, YOU ARE THE FIRST PERSON TO GET THEIR OWN MONDOUX – FRANCHISÉ NO. 1. WHAT DID IT MEAN FOR YOU?

HOW DOES THIS CONCEPT DIFFER FROM OTHER FRANCHISE OPERATIONS?

I see the difference mainly in getting the operation without having to “buy” the Mondoux brand.

HOW DOES IT DIFFER FROM OTHER MONDOUX OPERATIONS?

The difference is that it is not a classic bistro where we offer our customers pancakes and baguettes, but a bistro catering for top gastronomy and applying modern and little-used methods to prepare food, while also returning to traditional ways of processing food, such as fermentation.

HOW DOES IT FEEL TO HAVE YOUR OWN OPERATION?

I had mixed feelings, happy about the opportunity, but a little—and only a little—worried. But I think that was natural, as I was starting something totally new to me. However, it was also an honour, and I’m very grateful for the opportunity.

YOU WERE EXECUTIVE CHEF AT MONDOUX. HOW IS IT AT MONDOUX FRANCHISÉ No. 1? ARE YOU CHEF OR THE BOSS?

First, I’m the boss. I’m no longer just responsible for the kitchen but the entire operation. But in my heart, I’m still the head cook :). I’m a very strict chef (behind the back of the head chef :).

WHAT WERE YOUR PLANS AND GOALS WHEN YOU STARTED THIS JOB? HAVE YOU ALWAYS WANTED TO HAVE YOUR OWN OPERATION?

The plan was to be a successful chef—this was my priority, and I pursued it really purposefully. Regarding my own operation—yes, of course, I considered this option. I think it’s natural in this industry. But I also wanted to be a chef at a luxury hotel or have my own guest house somewhere in the mountains.

WHO CAN ALSO HAVE THEIR OWN FUTURE OPERATION AT MONDOUX?

Anyone who has been working with us for at least one year can have their own Mondoux operation. Of course, they need to be purposeful and have the right feeling and commitment to work. It’s a unique opportunity for young people with the right drive. They don’t necessarily have to have a background in the food services industry, it’s enough if they want to have their own business and have a clear idea of how to handle it. If someone like this is reading these words, don’t hesitate to join us! Everyone can have their own Mondoux.

If you would like to know more about Mondoux FRANCHISÉ No. 1 and the entire Mondoux franchise project, write to .